The latest attack on the squatting movement in Greece is the preamble for a massive operation of housing dispossession by the right-wing government.

Dimitris Indares was still in his pyjamas when the police knocked on his door in the neighborhood of Koukaki, in Athens, in the early hours of Wednesday, December 18. Not long after that, he was lying down on the floor of his home’s terrace, with a Special Operations policeman’s boot on his head. He and his two adult sons were beaten up, handcuffed, blindfolded and taken under police custody. What was Indares’ crime? He had refused to let the police go through his home without a warrant in its operation to evict the squat that was right next door.

Indares’ profile is not that of a squatter. A 55-year old film director and film school teacher, a homeowner, politically moderate with conservative views, working hard to get his sons through university. One could say he is a typical member of the Greek educated middle class and a typical voter of the governing New Democracy party. This fact didn’t stop the police from pressing fabricated criminal charges against him, accompanied by an operation of false accusations and defamation.

The Minister of Citizens’ Protection himself unashamedly lied that the police had a warrant, that Indares resisted arrest and tried to snatch the gun off a police officer, that his two sons were inside the squat next door and had attacked the police. Despite many testimonies to the contrary and a leaked audio recording of the moment Indares was being detained which disproves the accusations, the minister’s fabrications were repeated at full force by the government’s propaganda machine: the mass media owned by a handful of oligarchs allied with the governing party. 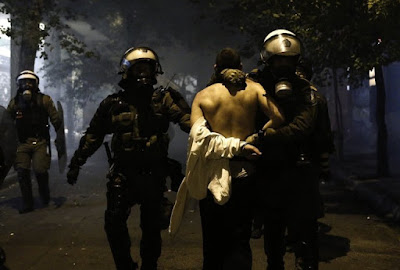 Even when Nikos Alivizatos, the Ombudsman for Police Violence appointed a few months earlier by the minister himself, threatened to resign in light of the evidence of police brutality, the mainstream press was quick to dismiss the Constitutional Law professor as a leftist who sides with squatters.

Indares’ case got a lot of publicity, with many denouncing the fabrications. Meanwhile, the government and its opinion makers refused to back down. What is of concern here is that this massive wave of support came only when an “average family man” had his civil liberties violated.

Since New Democracy was elected with a “law and order” agenda last July, the police have been acting like an occupation army in Greek cities, routinely violating human rights and dignity. Arbitrary detentions, torture, beatings, teargas attacks, raids in cinemas and nightclubs, public humiliation, verbal abuse, have been the order of the day.

Even so, as long as the arbitrary violence of the police was directed towards protesters, youth, students, squatters, homosexuals, immigrants or the marginalized, the reaction of the public opinion to daily gross human rights violations was at best timid. Sadly, such abhorrent practices are made possible by the active or passive support of a part of Greek society who have been convinced that in the battle against the internal enemy all means are legitimate, even the violation of constitutional rights and human dignity.

Indares himself, in press statements after he was released pending trial, appeared confused as to what really hit him. He is obviously appalled by the campaign of defamation against him, but he seems to consider himself the innocent victim of a just war. In the leaked audio recording of the moment of his arrest, he is heard reproaching the police of “acting like anarchists,” even though the possibility that anarchists break into his home, beat him up and kidnap him is non-existent. In his desire to remain equidistant, Indares does not acknowledge the arbitrary nature of police repression nor the reality-distorting function of the mass media, as long as peace-loving, hard-working, everyday people like him remain immune from this violence.

But it is precisely peace-loving everyday citizens like him who have most to lose in this new cycle of dispossession in Greece.